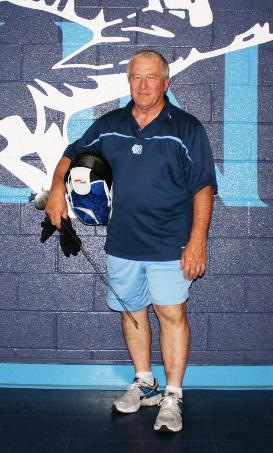 Ron Miller came to Carolina in 1967 as a physical education instructor. A Kentucky native who grew up in Florida, Miller brought knowledge of asport virtually unknown to a southern campus bred on basketball and football. Not only did Miller impart that knowledge to countless students in physical education classes, he established and maintained the South’s dominant fencing program.

Miller’s influence on his fencing squads parallels that of legendary basketball coach Dean Smith’s impact on former basketball players and coaches. Smith’s October 9, 1997, retirement left Miller as the most tenured coach at Carolina. More than 140 former fencers, whose numbers included team members from nearly every squad since 1968, gathered at the Dean E. Smith Center on October 18, 1997, to celebrate and honor Miller’s tenure.

Commitment, dedication and integrity, were uttered in same building for another coach so recently, were spoken in homage of Ron Miller. NCAA champion fencer, 1992 Olympic fencer and 1983 Carolina alumnus John Friedberg, in thanking Miller, called the Carolina program a “unique, special environment to learn in.”

Miller served as a coach for the U.S. Junior World Team in 1981 and was also the coach for the Senior World Championship Team in 1983. The 1987 Junior Pan American Team was also coached by Miller. From 1985-95, he served as the director of the USFA’s National Coaches College and from 1983-91 he was the director of the USFA’s
National Junior Elite Summer Programs. He is a three-time member of the NCAA’s Fencing Committee and is a three- time NCAA Regional Committee Chair. Miller has been a USFA National Coaching Staff member since 1977.

Miller has other little known talents, too. He single-handedly restored several of his past homes as well as one for NC sculptor Peggy Burke. He has a fine eye for architecture; challenging himself to design and construct a prototype one room living space using no power tools; even carrying water for cement footings from a near-by creek. His early jobs during various stages of schooling included drafting, designing swimming pools and catching rattlesnakes bare-handed to sell for venom. His father had a professional landscaping business in Florida so Miller grew up with a knowledge of plants,animals and tools. A multi-sport athlete, Miller played “any sport with a ball” all through school. Miller loves to dance and has invented his own cookie recipe.